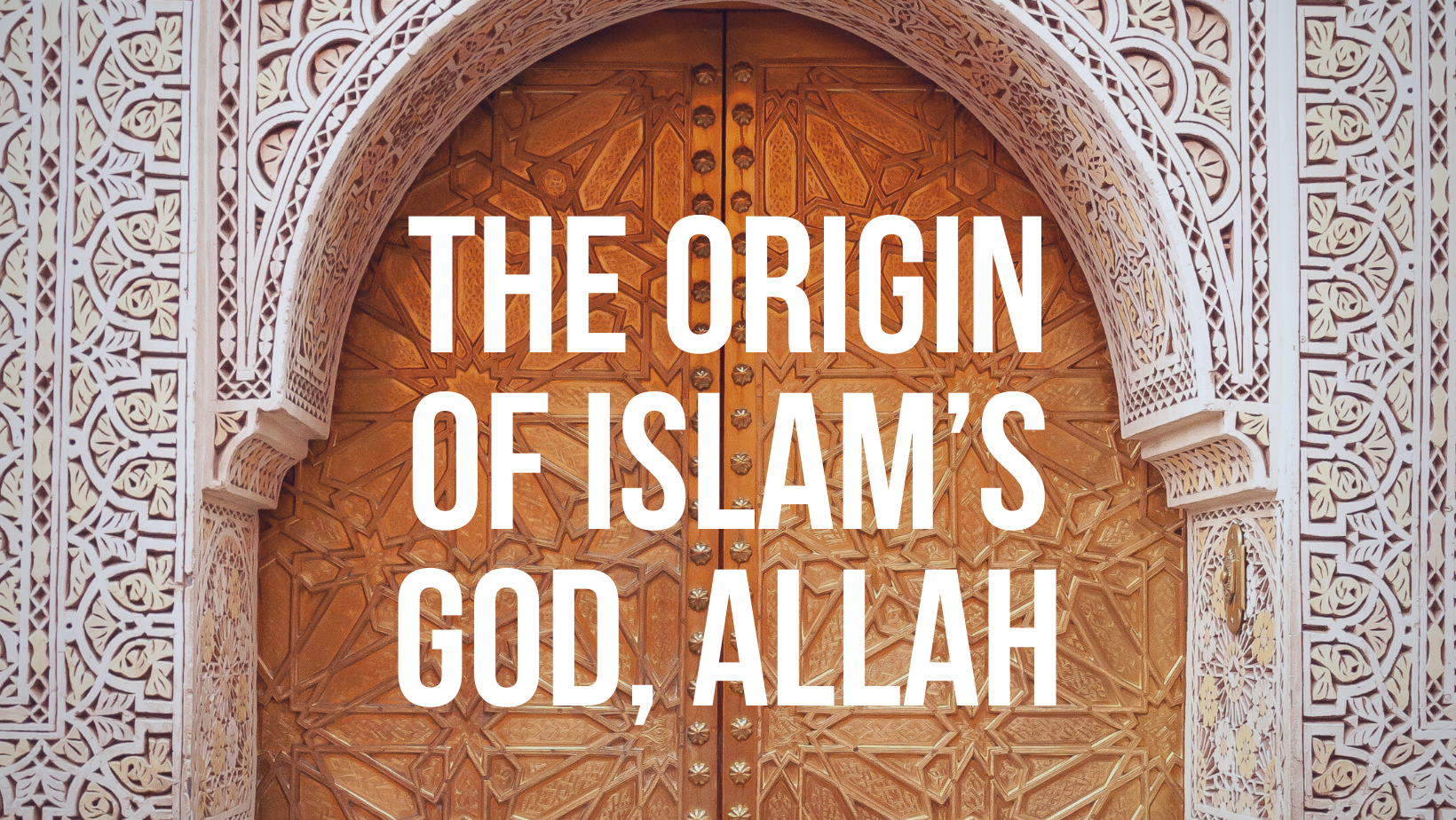 The origin of Islam’s god, Allah

We have already discussed the differences between Allah and Yahweh in our blog post: Who is Allah compared to Yahweh?

But when we look at the qualities of Islam’s god through the lens of the Quran and through what he tells Muslims, we find out that he is a progressive god – not in the sense of having forward-thinking political ideas, but in the sense of changing his message and values. This is in contrast to Yahweh’s consistency and unchanging character.

Many people do not know that the idea of the Islamic god, Allah, already existed for decades as a pagan deity before Muhammad claimed he got his first vision in 612 AD. Al-ilah was the title for the chief god, the moon god, in pagan religions.

Except for a few elite scholars, Muslims are not aware of this origin to their god. They believe and are taught that the God of the Bible revealed Himself as Allah to Muhammad, continuing the divine revelation story of the Bible through a new prophet. Muhammad claimed that Allah is the same God who revealed Himself to the Jewish people and the Christians, but was revealing more of himself.

There are many holes in this theory. It would make more sense if Allah had first come into the picture with Muhammad, but there is archaeological proof that Allah was a pagan deity first. Muhammad took this image of a pagan god and shaped it to be something else, claiming that he was the same as Yahweh, the God of the Jewish people and Christians - which is not the case.

Allah’s inconsistencies in the Quran

Did you know that Allah’s commands to Muhammad contradict themselves and change through Muhammad’s lifetime? We go into detail of these inconsistencies in our post, “Contradiction in the Quran: Allah changing his word,” but we need to look at some key points here.

Remember, at the beginning of Islam, Muhammad tried to get the Jewish and Christian people to accept him as a prophet. He preached that Allah was the same god as the God of Abraham, of the Old Testament, of Jesus, and of the New Testament (in fact, Islam claims that Jesus was a prophet). This is why there are verses in the Quran that say things like:

“Indeed, the believers, Jews, Christians, and Sabians—whoever truly believes in Allah and the Last Day and does good will have their reward with their Lord. And there will be no fear for them, nor will they grieve.” Sura 2:62

But the Jewish people and Christians did not accept Muhammad as a prophet nor did they embrace Allah as their god. Because of this, Muhammad began receiving different messages from Allah:

“Fight those who do not believe in Allah and the Last Day, nor comply with what Allah and His Messenger have forbidden, nor embrace the religion of truth from among those who were given the Scripture, until they pay the tax, willingly submitting, fully humbled. The Jews say, “Ezra is the son of Allah,” while the Christians say, “The Messiah is the son of Allah.” Such are their baseless assertions, only parroting the words of earlier disbelievers. May Allah condemn them! How can they be deluded from the truth?” Sura 9:29-30

If Allah were the God of the Old Testament, it would make no sense for him to first tell his followers that the Jews and Christians are going to be rewarded, but then suddenly decide instead that they were “deluded from the truth” and condemned. It makes much more logical sense to see that these commands were changing because of the Jews and Christians rejecting Muhammad and his teachings.

Allah’s words in the Quran contradict themselves at least 200 times. If he were truly the God of the Jews and Christians, how can Islam explain the fact that God’s message was consistent over thousands of years in the Old and New Testament, but then Allah contradicts himself and changes his word within a 23-year period (during Muhammad’s time supposedly receiving the Quran)?

What this means for our Muslim friends

Most Muslims do not know the origin of the god they serve. They do not see the inconsistency between Muhammad’s claims about Allah, Allah’s origin, and how his message changed.

Muslims worship an inconsistent god. Essentially, Muslims live in fear of Allah, being punished by him and being unable to please him. How can they trust his word? How can they truly know their fate after death?

Because of their inability to trust Allah, Muslims turn to other things for security, such as witchcraft and occultism. This is called Folk Islam, and is very widespread in Islam.

Questions to open up this topic with your Muslim friends

As you talk about this with your Muslim friends, have compassion towards them. They do not have a god who loves them and wants a relationship with them. They do not know where to put their trust. Your goal of the conversation should be to introduce them to the true God, whom they can trust and love without fear of Him changing his mind. Find out how they feel about Allah by asking these questions:

Prayer for our Muslim friends

Dear Lord, thank you for your consistency – in your words, love, and character. Please open up my Muslim friend’s heart to discover the truth about the god they follow. Let me be there for them when they have questions, so that I can point them to the love you freely offer us. Amen.

Subscribe to receive 1-2 emails a week with our newest blogs!
Next Inheriting Islam: How fear keeps Muslims from leaving the religion