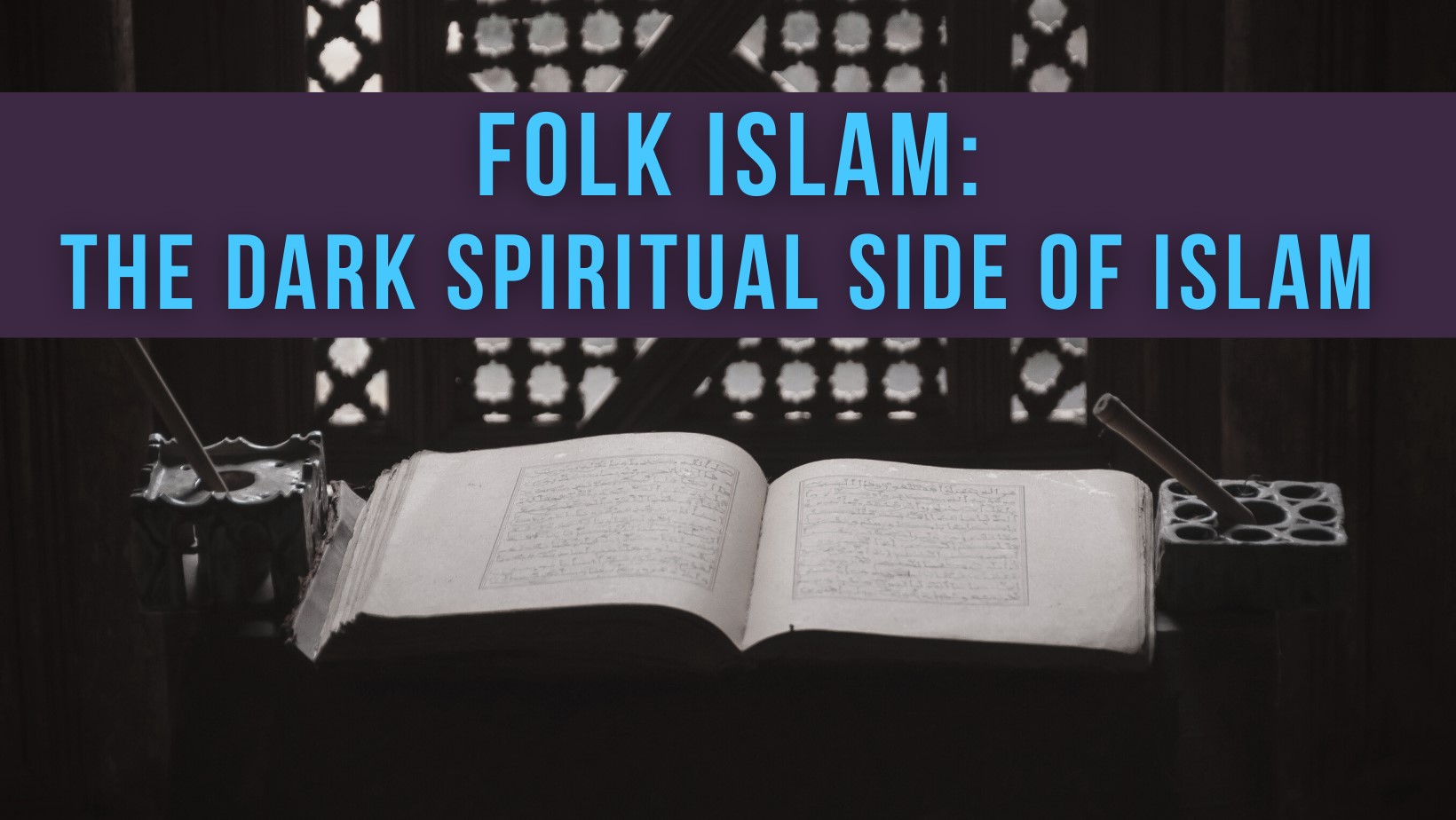 Folk Islam: The dark spiritual side of Islam

A large part of the Muslim population in the world has religious beliefs and practices that are different from the more orthodox Islamic beliefs. This is called Folk Islam and it is a combination of the Quran, Hadith, occultism, and tribal religions. Muslims believe that Allah is a distant god who won’t answer their prayers, so they take matters into their own hands and appeal to different spiritual powers.

Powers that Muslims believe in

In their daily lives, Muslims are very aware of evil spiritual beings and they believe that these spirits affect their lives immensely. Therefore they fear evil spells, omens, harmful spirits, and even “the evil eye,” so they turn to other powers and beings for help. These include spirits (they call them Jinn), fairies, dead Imams, and ancestors. Muslims believe that they can reach these spirits through dreams, visions, and divinations. They also use physical items that supposedly have spiritual power, like amulets or charms to protect them from evil spells. Many rituals involve astrology and symbols such as the waning and waxing moon – since this is the symbol for Islam.

Incantations of the Quran

Folk Islam does not leave out the Quran! In fact, Muslims will often wear a bracelet or necklace with a small leather pouch that contains verses from the Quran and they believe it protects the wearer from evil or even heals them. They also believe some Quranic verses supposedly cure headaches, fevers, blindness, and toothaches. For example, Folk Islam teaches that Surah 113 helps with diseases, Surah 114 counters psychic afflictions, and Surah 13 will cure a headache.

Even the Quran itself is used as a charm. Sometimes people pin miniature copies of the Quran onto children’s clothing. In Egypt, people believe that if you recite certain parts of the Quran everyday out-loud, Satan will not enter your home.

Interestingly, most authority figures who provide the charms and are sought-after for deliverance are Imams and Sheiks that one would assume would lead people back to orthodox Islam, but instead they support the extra additions of Folk Islam. Throughout the Muslim world, whether in large cities or remote villages, religous Imams or their wives are known to be the go-to leaders in Folk Islam. Their knowledge of the Quran and Muhammad's life empowers them to enter the spiritual realm which results in occultic practices and control of people's minds and wills.

Muslims who practice Folk Islam believe that bad luck comes to people who ignore traditions and superstitions. The result is a life filled with fear and bondage to these practices. For example, there are certain days they believe they should not take a bath, that they have to bury their children’s teeth, shave a newborn baby’s hair, attend exorcism dances, and offer animal sacrifices to be spared from curses and punishments. This is the way that many Muslim groups combine tribal religions, superstitions, and Islam into one body.

Different cultures combine tribal religion and superstition with Islam differently. The Pashtun women in Afghanistan wear charms for protection and have animistic practices combined with their Islamic rituals. The Baggara people group in Eastern Chad and Western Sudan believe in “the evil eye”; they even protect their cattle from jealous eyes with the help of witch doctors. Filipino Muslims believe that the world is alive with spirits so they make offerings to these spirits.

How this affects a Muslim’s mind

Being exposed to evil from the spiritual realm leaves Muslims feeling powerless and in continuous danger. They do not believe that Allah is there for them, so they must turn to other things. Instead of focusing on finding or experiencing God, they are distracted by having to constantly keep themselves spiritually “safe” from bad luck or evil spirits.

Satan uses all of these things to oppress Muslims by keeping them fearful, suspicious, and threatened. Muslims are not even able to think about what they truly believe. Through this, he distracts them from meeting the true God and the salvation He is offering them.

Questions to ask your Muslim friend

You have a great opportunity to help your Muslim neighbor figure out what superstitions control their life and to recognize these false practices and distractions. If you see something in your Muslim friend’s house that you don’t understand, like a blue eye ornament, a hand hung on a wall, or a miniature Quran, ask about it! Do not be afraid to talk to them about the spiritual realm. You have the Holy Spirit of God living in you. He will protect you and guide you as you explain and lead your Muslim friend to realize that there is a Power stronger and bigger than all the evil spirits–Jesus–and through His name they can experience victory and be set free from any superstitions, cult practices, and bondages. You can also pray over them in the name of Jesus, and ask that they be set free.

Here are a few opening questions to start this important conversation:

Subscribe to receive 1-2 emails a week with our newest blogs!
Next Mental health check-in for you and your Muslim friend