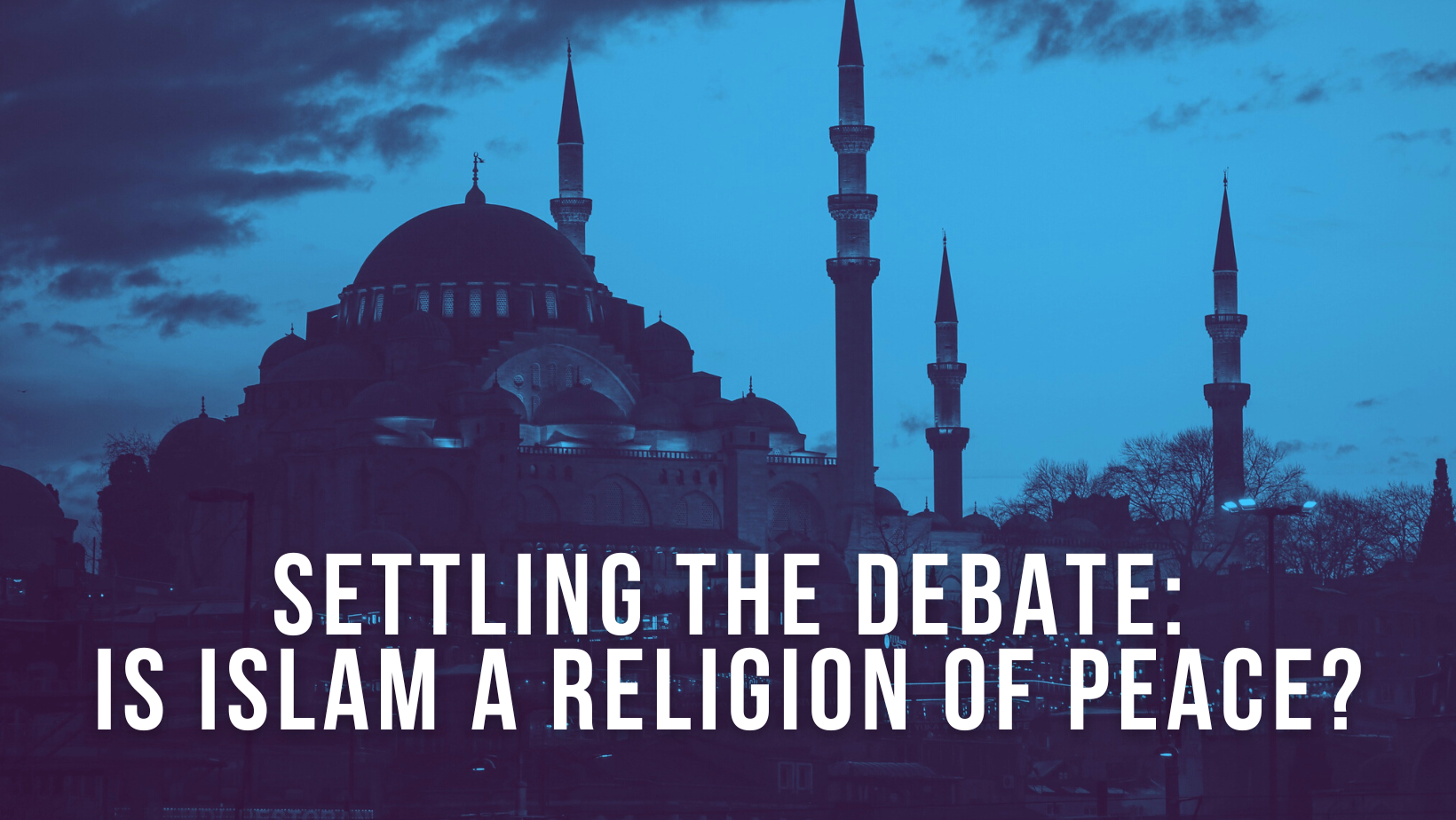 Settling the Debate: Is Islam a religion of peace?

There is an ongoing debate about whether Islam is a peaceful religion. We are here to settle that debate once and for all. We are going to look at all of the facts: what its founder said, what its texts say, its history, and its current actions. Then we will see if Islam truly is a religion of peace.

Disclaimer: We are not focusing on Muslims, the followers of Islam, and whether they are all peaceful; we are focusing on the religion itself. No matter what we discover, each Muslim makes their own individual decision about how they live their life.

When Muhammad originally started claiming he was a prophet of Allah, he was peaceful. He was trying to get the Jews and Christians to accept him as one of their prophets, as well as gain followers from the tribes around him. When Muhammad was kicked out of Mecca by pagans for preaching against idolatry, he then moved to Medina. This was when the Medinan Period of Islam’s history began (622-632 AD), and this was when Muhammad became strong and violent.

It has been recorded that Muhammad started over 25 wars during the Medinan period–this lasted 10 years until his death–killing anyone who did not submit to Allah and conquering people groups one by one. This was how Islam spread so quickly and gained so many followers early on; it was either convert or die. Sometimes, when Muhammad needed more money, if someone did not want to convert to Islam, they were forced to pay the jizyah, a special tax for Christians and Jews that sometimes took up to 90% of their total income.

What do the Quran and Hadith say about peace?

The Quran has verses that talk about charity and peace such as:

“...and give food—despite their desire for it—to the poor, the orphan, and the captive, saying to themselves, ‘We feed you only for the sake of Allah, seeking neither reward nor thanks from you.’” Quran 76:8-9

“Spend in the cause of Allah and do not let your own hands throw you into destruction by withholding. And do good, for Allah certainly loves the good-doers.” Quran 2:195

Even sections of the Hadith talk about spreading peace:

“O people, spread peace, feed the hungry, and pray at night when people are sleeping and you will enter Paradise in peace.” (Sunan Ibn Majah)

Muhammad’s wife Aisha was quoted saying, “The Prophet (PBUH) said, ‘The most hated person in the sight of Allah is the most quarrelsome person.’” (Sahih Bukhari)

However, in the Quran, there is very clear and obvious promotion of jihad, which is “holy war,” for the sake of Islam. In fact, there are 164 verses that reference, encourage, or order that Muslims must fight to spread and protect Islam. These verses were revealed to Muhammad during the last 10 years of his life, so they cancel out the first peaceful revelations. Read more about this in our blog about abrogation. In addition, Sharia law, Islam’s judiciary system that is based on the Quran and the Hadith invokes violent punishments. We go into more detail about jihad and Sharia law in this blog post.

Has Islam historically been peaceful?

After Muhammad’s death, some of the Arab tribes that had been overtaken by Muslims tried to renounce Islam. But loyal followers to Muhammad engaged in violent wars for 12 months after their leader’s death to reconquer these rebellious tribes. In just 100 years, the Islamic empire spread through military conquests and trade routes until it was one of the biggest empires in history, surpassing the size of the Roman Empire.

Islam took over countries violently because of what the Quran and the Hadith teach about fighting those who do not believe in Allah.

“Fight those who do not believe in Allah and the Last Day, nor comply with what Allah and His Messenger have forbidden, nor embrace the religion of truth from among those who were given the Scripture, until they pay the tax, willingly submitting, fully humbled.” Quran 9:29

According to a study done in 2019, there have been, at minimum, over 33,000 Islamist attacks that killed over 167,000 people between 1979 and 2019. The majority of these attacks are in Muslim countries and target civilians. Since 2013, Islamism has been the leading cause of death when it comes to terrorist attacks.

In contrast, The Muslim population gives more to charity than any other group in the US. But almost all their giving is to support mosques and Islamic nonprofits. Many Muslims give to expand Islam in the west and make it known to westerners. This is a type of Jihad as well. Remember, zakat is one of the mandatory Five Pillars of Islam, where a Muslim must give to their imam at the mosque, but the chances of rewards from Allah increase if they give “sadaqah,” which is voluntary charity.

In all four areas, we see that Islam is mostly used as a means to oppress and attack people. Muhammad was not a peaceful man after he gained power. The Quran and the Hadith have full passages that tell its followers to fight in “holy war” to spread Islam. The Islamic Empire grew through violence and conquering of other people groups, and in modern-day, Islam is the leader in terrorist attacks around the world.

When you look at the basic principles, history, and actions of Islam, it is clear that Islam is not a religion of peace.

On an individual level, most Muslims are peaceful people– they may even condemn the actions of Islamic terrorists and do what they can to make a good name for Islam. But a “good name” is not enough to counter hundreds of years of violence in Islam. Most Muslims do not know what the purest form of Islam is, or they try to avoid following those tenets because their humanity is stronger than their religion. The hard truth is that the terrorists who kill and conquer are following the purest form of Islam. 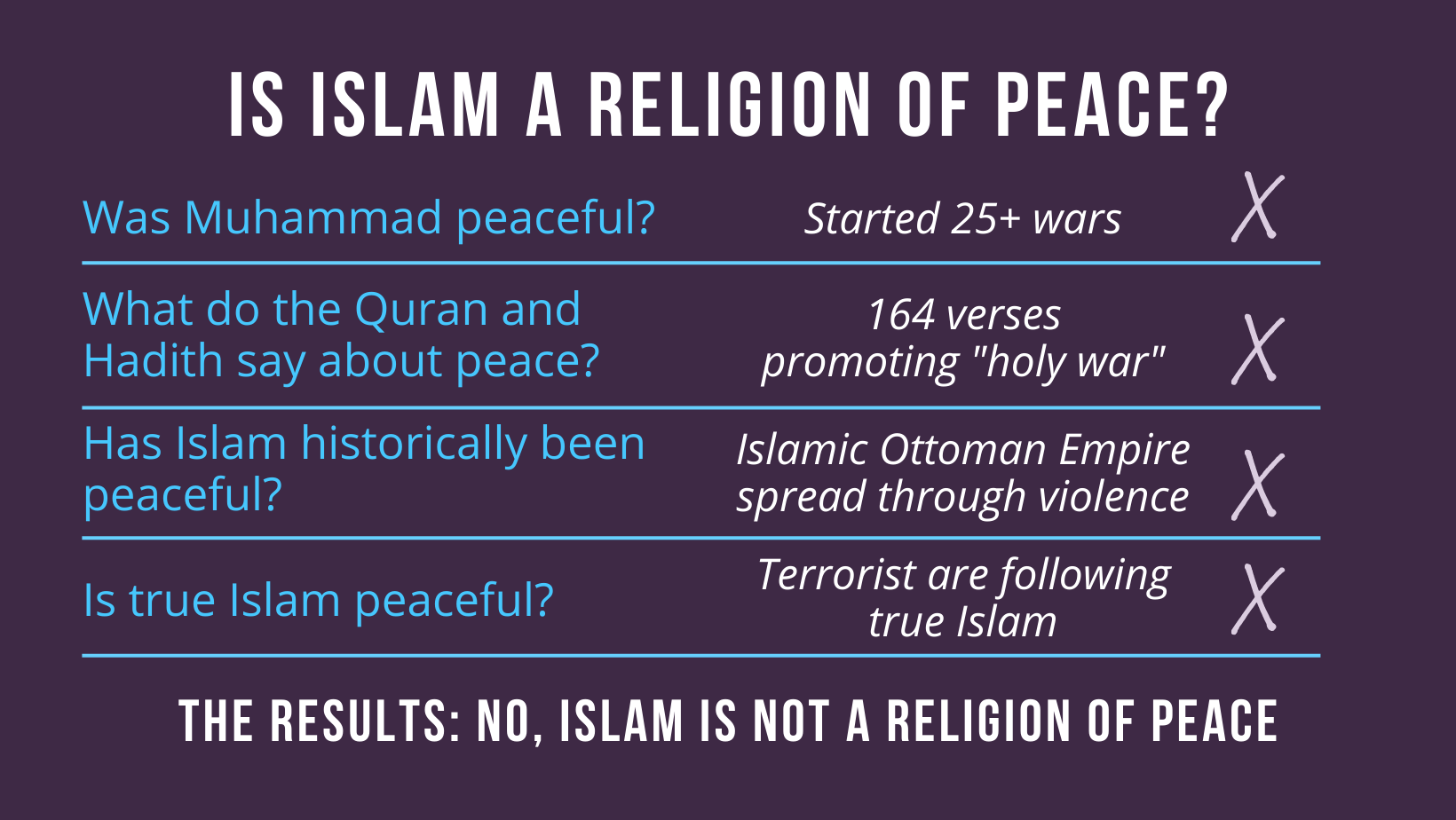 Instead of taking these things and shoving them in your friend's face, approach them with questions to leave the door open for a constructive conversation instead of an argument.

If your Muslim friend starts to get anxious from these questions and shuts down, please let them breathe. Tell them that they don’t need to answer you right away, and it can be something for them to wrestle with on their own or offer to continue the conversation later.

Remember, your Muslim friend is most likely not the one perpretrating the violence in Islam, they may not even be aware of the truth about Islam. This doesn’t mean that Islam isn’t a violent religion. So always separate between Islam the religion, and your Muslim friend, the follower of this ideology who was born into it and thinks he or she does not have the right to question it.  Pray that your Muslim friend can realize the truth about the religion they are under, and pray for them to instead turn to Jesus, who offers a life of love and peace.

Dear Jesus, thank you for coming to the world, not in anger or violence, but with peace. Allow me to be a light in my Muslim friend’s life so that they begin to desire something more than Islam. Please open their eyes to the truth and move their heart to accept you as their Lord. Amen.

Subscribe to receive 1-2 emails a week with our newest blogs!
Next WWJD: How to have healthy boundaries in evangelism