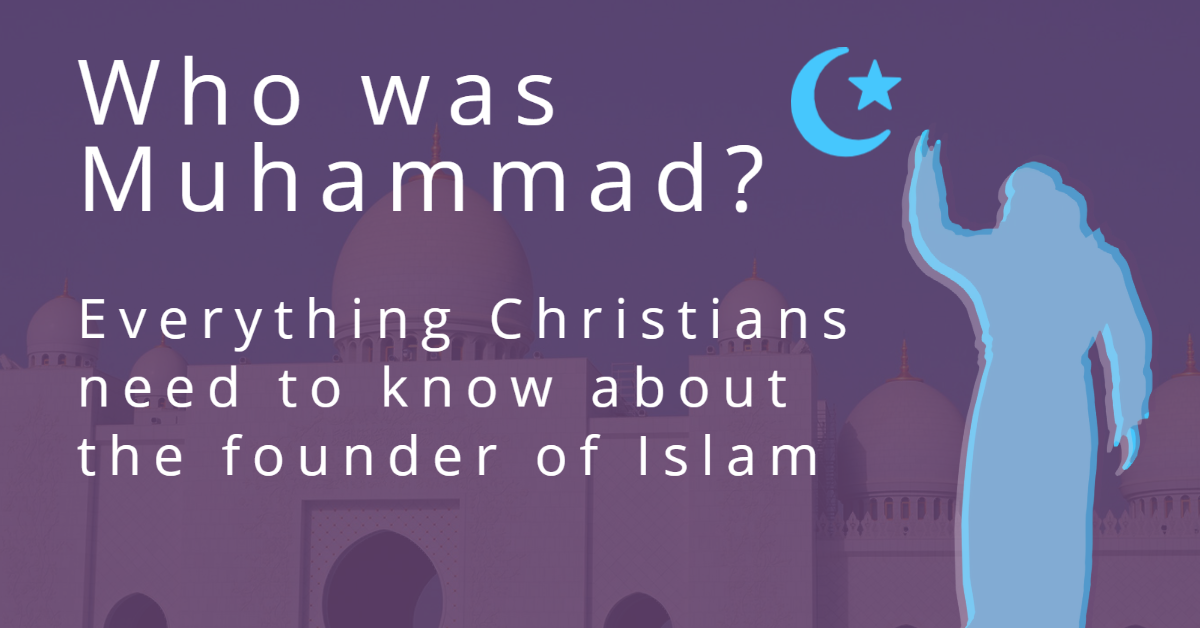 Who was Muhammad? Everything Christians Need to Know About the Founder of Islam

If you have Muslim friends, you've probably heard them mention Muhammad with praise more than once. Who is he, and why is he so important in the Islamic faith?

Muhammad is the founder of Islam which became one of the biggest religious, cultural, and political shifts in history. Muslims do everything they can to honor Muhammad; he is considered second to Allah.

Before we begin, it is important to know that you should never insult Muhammad in front of your Muslim friends. The history we are telling you is for your education and not to be used against your Muslim friends who, most likely, do not know the truths about Muhammad's life and behaviors. Learning about the founder of Islam will help you understand the true message and purpose of Islam and why Muslims, once their eyes are opened, get so excited to hear the message of love in the Gospel.

You may see the name of Muhammad written differently even in the various Quran translations, that's because it is an Arabic name and its spelling varies from one language to another.

By the time Muhammad was six, he was orphaned and under the care of his grandfather, who died two years later. He then lived with his uncle and cared for his cattle until he was hired by the tradeswoman Khadijah. That same year Khadijah (40 years old) asked Muhammad (25 years old) to marry her. They remained faithful to each other until she died 20 years later.
Together, they had three sons, who died young, and four daughters who grew up and got married. Muhammad was heartbroken that he had no son, so Khadijah bought a slave for him that Muhammad adopted as his own son.

The Culture in Which Muhammad Grew Up

There were six major religious influences in the Arabian Peninsula (currently Saudi Arabia) during Muhammad's life:

Muhammad had a habit of going into a cave for peace and quiet. One day in the year AD 610, while he was asleep in the cave, a spirit approached him, telling him, "Read." Some believe that this was the angel Gabriel. Muhammad did not know what he was supposed to be reading, so the spirit kept strangling him and releasing him. The third time this happened he told Muhammad, "Read in the name of your Lord, the Creator, Who created man of a clot of blood. Read! Your Lord is most gracious. It is He who taught man by the pen that which he does not know" (Sura 96:1-5). After repeating what the spirit said, Muhammad had the verses permanently in his mind.
He went home to his wife Khadijah, saying he had been possessed by Satan. However she reassured him: "Joy to my cousin! Be firm. By him who dominates Khadijah's soul I pray and hope that you will be the Prophet of this nation. By Allah, He will not let you down." Khadijah was the first person to affirm and believe in Muhammad as a prophet. 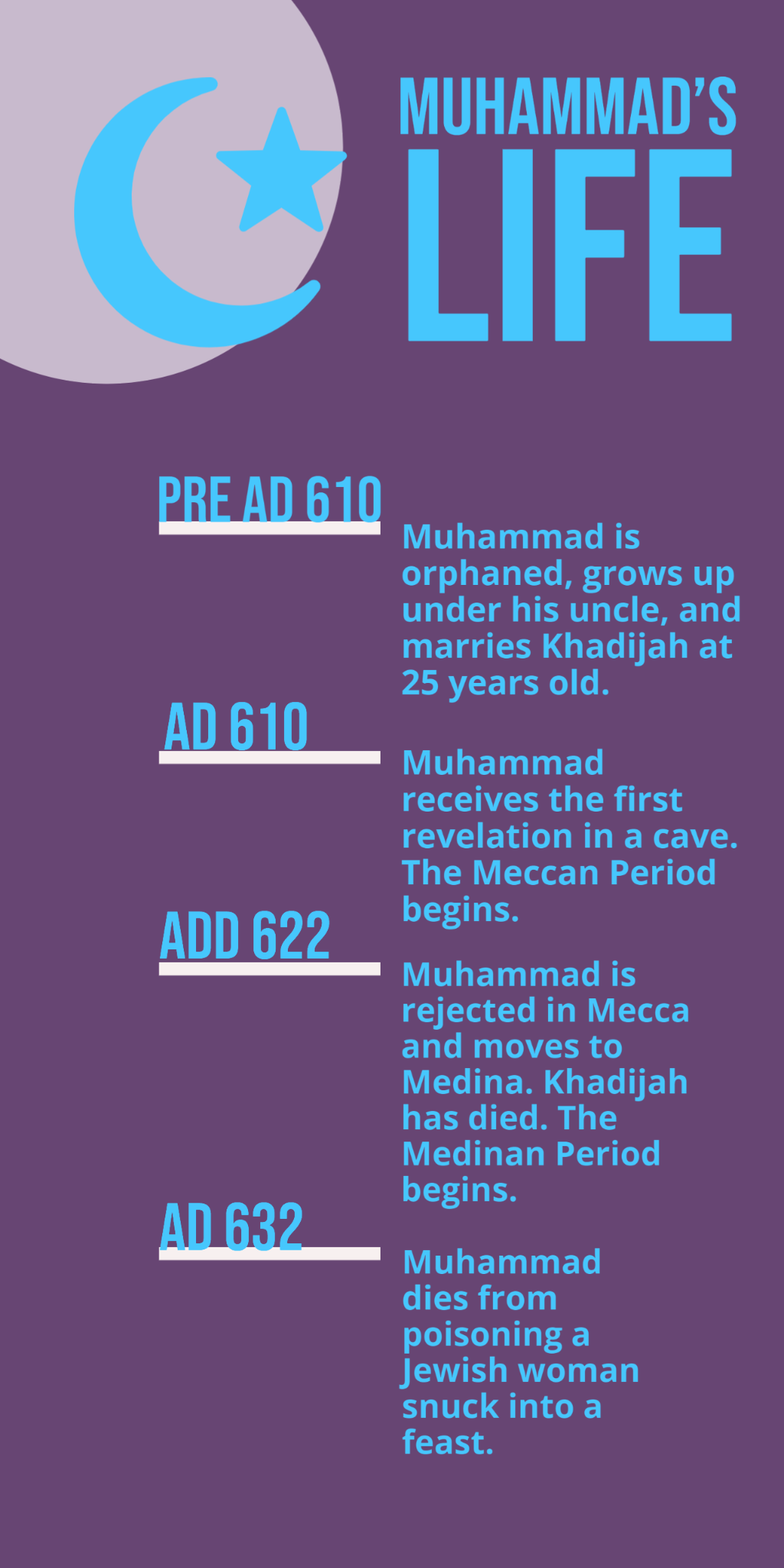 During the first 12 years of Muhammad’s prophethood, he lived in the city of Mecca in the Arabian peninsula. The tribe Muhammad belonged to did not accept him as a prophet, but he continued to preach that people should reject Idol worship and accept Allah as the one true god. Allah was telling Muhammad to be peaceful towards his opponents, befriend the Jews and the Christians, and forgive those who wrong him (Sura 73:10, 2:129, 3:89). He wanted the Jews and Christians to accept him as a new prophet, and he would pray in the direction of Jerusalem to appeal to the Jews.

The Jewish people rejected Muhammad and refused to let him visit Jerusalem, so Muhammad began to pray towards Mecca, the idolatrous city in which he was living. This is the same city all Muslims face when they pray to this day.

The tribes of Mecca began to persecute Muhammad for preaching against idolatry, so much that he had to escape the city and go to Medina, a city 280 miles north.
In Medina, Muhammad began to receive different messages from Allah such as  orders to fight and kill anyone who did not accept Islam. Also, Christians and Jews could live “freely”, if they submitted and paid a penalty tax (jizyah) of up to 90% of their annual income, otherwise they would be killed and their lands and wealth confiscated.

As a result, Muhammad began to lead his followers into battle. He waged over 29 battles in the last ten years of his life. In AD 629, Muhammad attacked a large and wealthy Jewish tribe and won. He killed all the men and took the women and children into slavery.

Muhammad's life ended at the hands of his enemies. After making a treaty with a Jewish tribe, a Jewish woman made a feast for Muhammad and his men, but she poisoned the food. Muhammad ate one morsel before one of his men died in front of him. Muhammad killed the Jewish woman; however, the effects of the poison had already started working. He died 3 years later after much suffering and pain.

Muhammad and his Wives

Muhammad’s first wife, Khadijah, died in AD 619. After this, Muhammad married 16 wives and took many slave girls who were captured in battle to be his concubines.

Child Wife- One of Muhammad’s wives, Aisha, was only six years old when he married her and she was nine when he consumated the marriage.

Married to his daughter-in-law- Muhammad was visiting his adopted son and fell in love with his daughter-in-law Zainab. Zainab heard Muhammad lusting after her and told her husband, who divorced her out of fear that Muhammad would hurt him to get to Zainab. Muhammad later revealed that Allah had ordered him to marry Zainab, so that no one could say what he had done was wrong.

“Saving” the Jewish slave- Muhammad permitted his soldiers to take women captive when they won a battle. One of his men chose the Jewish woman Safiyya, but Muhammad “freed” her from the soldier and married her himself.

Islam promotes Muhammad as a pure and sinless man. They say that he was faithful to his wife Khadijah until her death and a devoted follower of Allah. However, it’s interesting to see that during his marriage to Khadijah, she was significantly older and wealthier than Muhammad, and once she was no longer there to provide for him, he was a polygamous, sexually driven man.

Even the "revelations" he claimed to receive from Allah seemed to be serving his own interests. The messages were peaceful in the first period when he was poor, weak, and trying to gain the favor of the Christians and the Jews. When this method failed, Allah “changed” his messages and ordered him to lead Islam in violence and oppress anyone who did not accept him as prophet.

Talking about Muhammad with your Muslim friends

Now that you have learned the truth about Muhammad, don’t use this to attack your Muslim friends. In fact, you don’t need to talk about these faults unless your Muslim friend is the one to open up the subject.

Try to understand that they were lied to by the Enemy, and were taught that their "prophet" is the perfect example to follow. Pray that they will not be satisfied spiritually with what they have and will start to search for the truth.

If they ask why you don’t believe in Muhammad as a prophet, tell them about the uniqueness of Jesus Christ, and how He is sufficient for you. Don’t talk about all the things you don’t like about Muhammad, instead, share about the wonderful Savior and Redeemer and how He changed your life!

The majority of this post was from our devotional “Dare to Explore: 12 Lessons on Islam and How to Reach Muslims” by Samya Johnson with L. McAlister. If you would like to learn about Islam while working through a Bible Study, check it out!

Subscribe to receive 1-2 emails a week with our newest blogs!
Next Pray with Us: Saudi Arabia