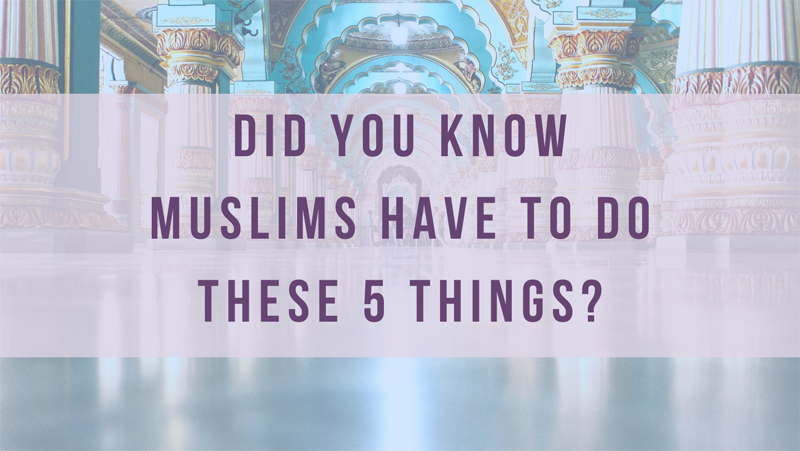 Did you know Muslims Have to do these 5 things?

You’ve probably heard your Muslim friend talk about obeying Allah by following specific practices, such as praying multiple times a day. These practices are called the Five Pillars of Islam – required of every Muslim to complete.

It’s important for you to know these practices so that you may realize how your friend’s faith affects their daily lives and even their worldview.

The Five Pillars of Islam

Shahada- Confession of the Creed

The first pillar of Islam is in essence their “confession of faith.” Anyone who wants to convert to Islam or affirm his/her adherence to Islam must say this statement in Arabic:

“I testify there is no god but Allah, and I testify that Muhammad is the messenger of Allah.”

The Muslim must be sincere as they say this creed and speak it in Arabic to be accepted by Allah; if they do not understand Arabic, it will be translated for them, but they still must say it in Arabic. Muslims repeat this creed tens of times every day, whether during their prayers or anytime they want to draw close to Allah. They hope that as they repeat it Allah will accept them and  increase their rewards here and in the afterlife.

Muslims are required to pray five times every day no matter where they are or what they are doing. They should stop and pray at these specified times: before sunrise, at noon, mid-afternoon, at sunset, and in the evening. Muslims are only allowed to pray in Arabic, even if they do not understand it. They must adhere to a specific postures and positions and recite specific sentences from the Quran.

Men are required to attend the noon Friday prayer at the mosque, which is led by Islamic leaders and they are encouraged to pray at least once a day in the mosque. Women are instructed to pray in their homes and are taught that praying in the home is more rewarding than praying in a mosque.

Every Muslim must perform ablution (washing) before every prayer. This includes specific steps of cleansing the body to present themselves pure for prayer.
When a Muslim wants to ask Allah for something, this is not included in Salat, but is considered a “supplication” (Du-aa). There are better times to present one’s supplications, such as late at night, during Ramadan, before war, or after a rooster crows. 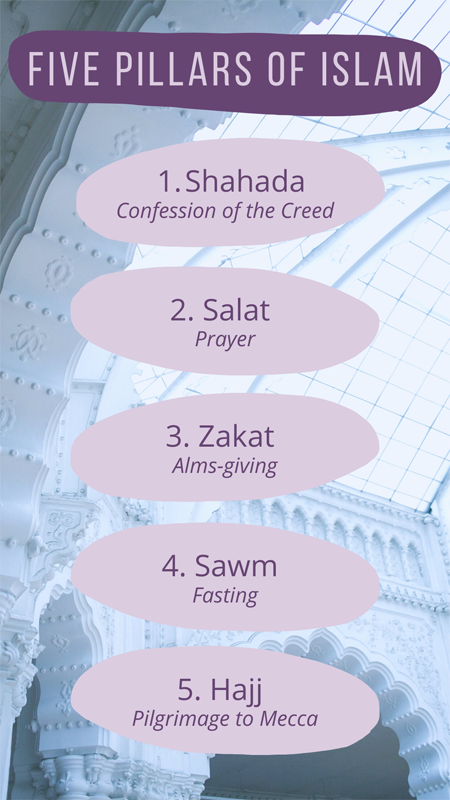 Zakat- Alms-giving
Muslims who have excess money after paying all their bills for the year are required to pay a certain percentage to help others. The word “zakat” means “to purify” and “to grow” – Muslims believe that giving to others purifies their wealth and reminds them that Allah has entrusted them with everything they have. Zakat is given to the mosque leader who is responsible for distributing it.

Often zakat is 2.5 percent of a person’s excess wealth, but Muslims are also encouraged to give “sadaqah”, which is voluntary charity, whenever they have the means to do so.

We explain the difference between zakat and the Christian act of giving in our blog post Tis the Season of Giving: What giving means in Islam versus Christianity.

Sawm- Fasting
Fasting is public, not private, within Islam. Muslims fast for the month of Ramadan, and during several other smaller events during the year, between sunrise and sunset. They fast from food and drink, as well as smoking, lying, and spousal intimacy. After sunset, feasts and celebrations begin within families and Muslim communities. The end of Ramadan is marked by the 3-day feast Eid al-Fitr to celebrate the end of the fast. Muslims also try to read and recite the entire Quran during Ramadan and hope to get closer to Allah.

All Muslims who are economically and physically able are required to complete a journey to Mecca (Saudi Arabia) at least once in their lifetime. Mecca is the home of the Ka-aba, a large structure that Muslims believe was built by Abraham.
After completing hajj, Muslims believe they are purified of all their sins and are promised to get entry to paradise after death.
Muslims who complete hajj are given new titles: “Al-hajj” for men and “Al-hajja” for women.

The word “jihad” in Arabic directly translates to “struggle or strife.” Muslims consider jihad the personal spiritual struggle to please Allah in one’s completion of the five pillars, but it is also widely accepted that jihad is used to describe religious war against non-Muslims to defend and/or expand Islam.

“And fight those who acknowledge not the Religion of Truth [i.e. Islam], from among the People of the Book (i.e. Christians and Jews), until they pay the Jizya tax with willing submission, and feel themselves subdued.”

Throughout the history of Islam, when Muslims practiced Jihad and invaded another country, they gave its inhabitants three options:

If a Muslim dies during jihad, they are martyrs and are promised unique rewards from Allah: no punishment at all, forgiveness of all sins, security from Allah’s judgement, seventy-two virgins in paradise, and rewards for their relatives.

Using the Five Pillars to connect with your Muslim friends

Maybe you've noticed that salvation in Islam depends on works and leads to bondage to works of the flesh to please a god who never guarantees salvation except through martyrdom in Jihad!
As a Christian, we have practices that are similar to some of the Five Pillars. For example, Christian baptism and confession of faith are similar to shahada (the confession of the creed). Christians also pray and give to the poor.
However, the main difference for Christians in doing these practices is that doing them does not change our standing with God for better or worse, we do them out of love for our Savior. Our guarantee is not in what we do but in what He did for us!
Now that you know the Five Pillars, take the chance to ask your Musim friend  about their personal experiences with each pillar. Ask why Allah asks them to do these things and whether they know for sure they did enough. Share with them your own experience; for example, how prayer is a conversation with God and not scripted.
5 Pillars of Islam Islam Muslim living giving prayer praying faith jihad

Subscribe to receive 1-2 emails a week with our newest blogs!
Next How to Disciple the New Believer Step-by-Step