How Islam uses Arabic to hide the truth 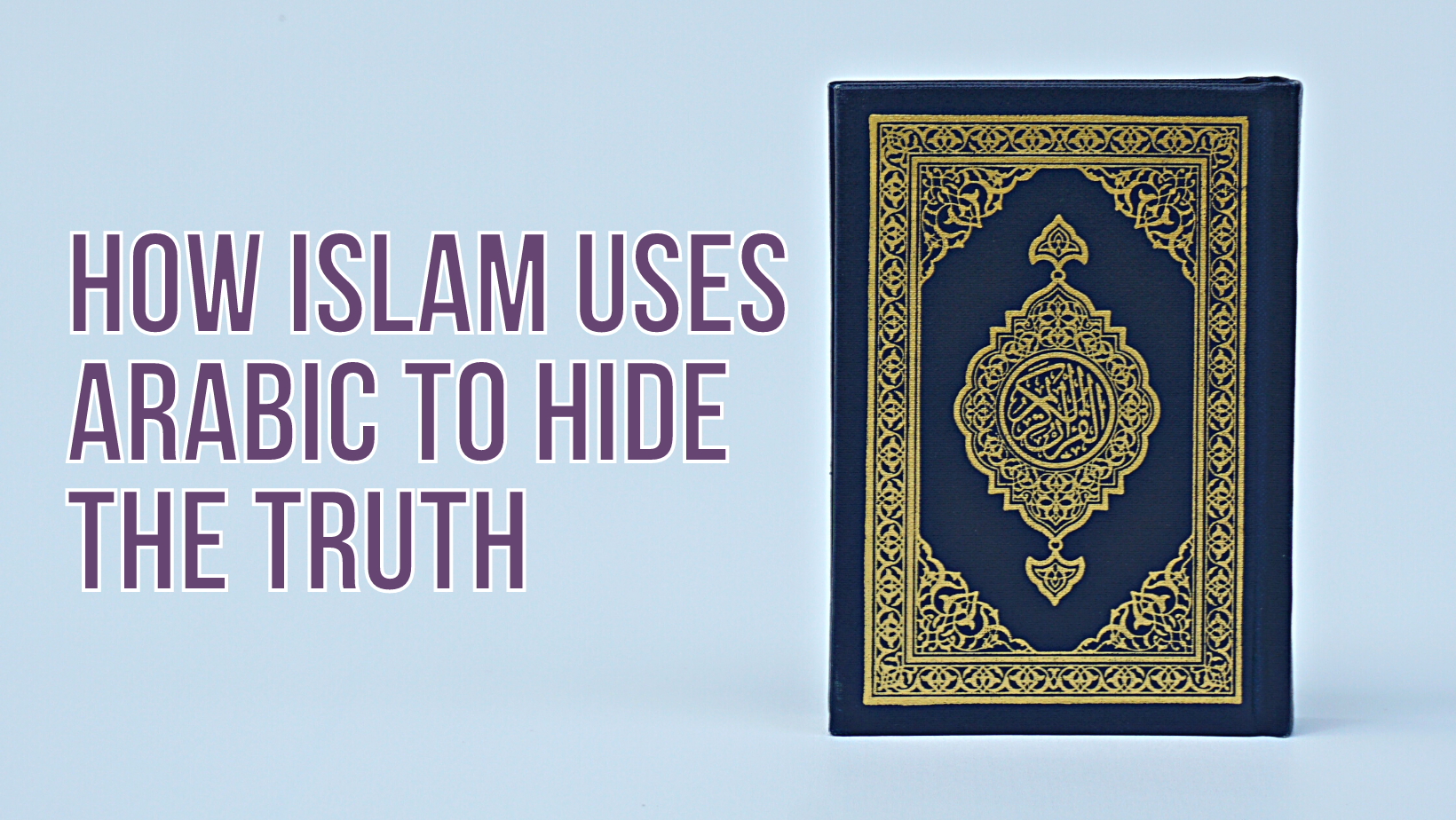 There are 1.8 billion Muslims in the world, and as you can imagine, this includes a wide variety of cultures, countries, and languages. Regardless of this diversity, there is one main language that is key to Islam: Arabic. This is Allah's language, therefore many Islamic practices must be performed in Arabic to be accepted by Allah, even if the Muslim does not speak Arabic.

What things must be said or done in Arabic in Islam?

The rituals and rites in Islam that must be done in Arabic include reciting the Quran, performing the daily five prayers, and saying the confession of faith.

The Quran is written in old classical Arabic, and Muslims believe that it transcends translation. In fact, any translation of the Quran in a different language is called “The meaning of the Quran,” and often these translations are watered down so that they don’t offend non-Muslim or western Muslim  readers. Muslims are encouraged to repeat and recite the Quran in the right way (vowels, chanting, stops between phrases, and pronunciations) and they do not need to understand it. This is what pleases Allah.

The confession of faith (The Islamic Creed)

"I confess that there is no god but Allah, and I confess that Muhammad is the messenger of Allah." This is the Islamic creed that the Muslim repeats countless times every day!

This confession of faith is the sign of conversion to Islam, and it is also the daily affirmation they repeat in every prayer. It must be uttered in Arabic in order for Allah to accept it. You hear Muslims from Indonesia, Russia, North America, Africa, and all other languages unite by saying this creed in Arabic.

Prayers must be in Arabic

Muslims are required to perform prayers five times every day as one of the Five Pillars of Islam. These prayers are memorized and spoken in Arabic, and they should be pronounced correctly regardless of the Muslim's language of origin. In addition, Muslims believe when they die they will be questioned by angels about their life and devotion to Allah, and they have to answer these questions in Arabic to pass the test.

“It is a Quran revealed in Arabic without any crookedness, so perhaps they will be conscious of Allah.” Quran 39:28

The problem with having a superior language in Islam is that keeping the Quran in Arabic makes it harder for those who do not speak Arabic to understand the true meaning of countless controversial verses within the Quran.

Since Islam requires important rituals to be done in Arabic, it begs the question, “Why are other languages not accepted?” Is it to hide the truth about Islam from its followers? Is it about controlling people by making the religion mysterious? Or is it just because Muhammad said so? Since only 20% of Muslims are native Arabic-speakers, this leaves most of the Muslim population having to say and do things that they do not fully understand.

Muslims claim that having one language has protected their religion and their Quran from corruption throughout the centuries. But if Allah created all languages, and he is truly all-powerful, isn't he able to protect his message even when other languages are used?

The true God is not limited to one language

As a native English-speaker, imagine having to read and memorize your Bible in Russian or Chinese in order for God to “count it” for you. Or imagine having to pray in the Aramaic language, which Jesus spoke, for your prayer to be answered.

The true God is not limited to one language; He spoke to everyone we read about in the Bible in their different native languages, and today He does not require us to learn a particular language to speak to Him. God created all languages and accepts worship in all languages.

The Bible has a diverse historical background, written in many different cultures, contexts, and languages throughout the 1,600 years that it was written. The books of the Bible were written in Hebrew, Aramaic, and Greek, and when these verses are translated the meaning is not changed.

God does not require us to change our language to pray or be accepted by Him. This is a beautiful parallel to how we don’t need to change anything or fix anything about our lives before coming to know Jesus. He calls us to come as we are and accept the gift of salvation that He freely gives.

Talking about Arabic in Islam with your Muslim friend

The easiest way to start a conversation about Arabic in Islam is asking your Muslim friend for their personal opinions and experiences with it! You can ask them questions like:

Asking your Muslim friend about this is a great way to start conversations about their beliefs and have a dialogue, not an argument and not an interrogation. Truly seek to understand their perspectives and experiences and pray that the Holy Spirit gives you the right words in the conversation.

Dear God, thank you for keeping the Bible’s meaning the same across translations. Thank you for allowing me to come to you as I am, without having to say and do things perfectly. Please help me talk about this language barrier with my Muslim friend and point them to You and your love. Amen.

Subscribe to receive 1-2 emails a week with our newest blogs!
Next Pray with Us: Sudan