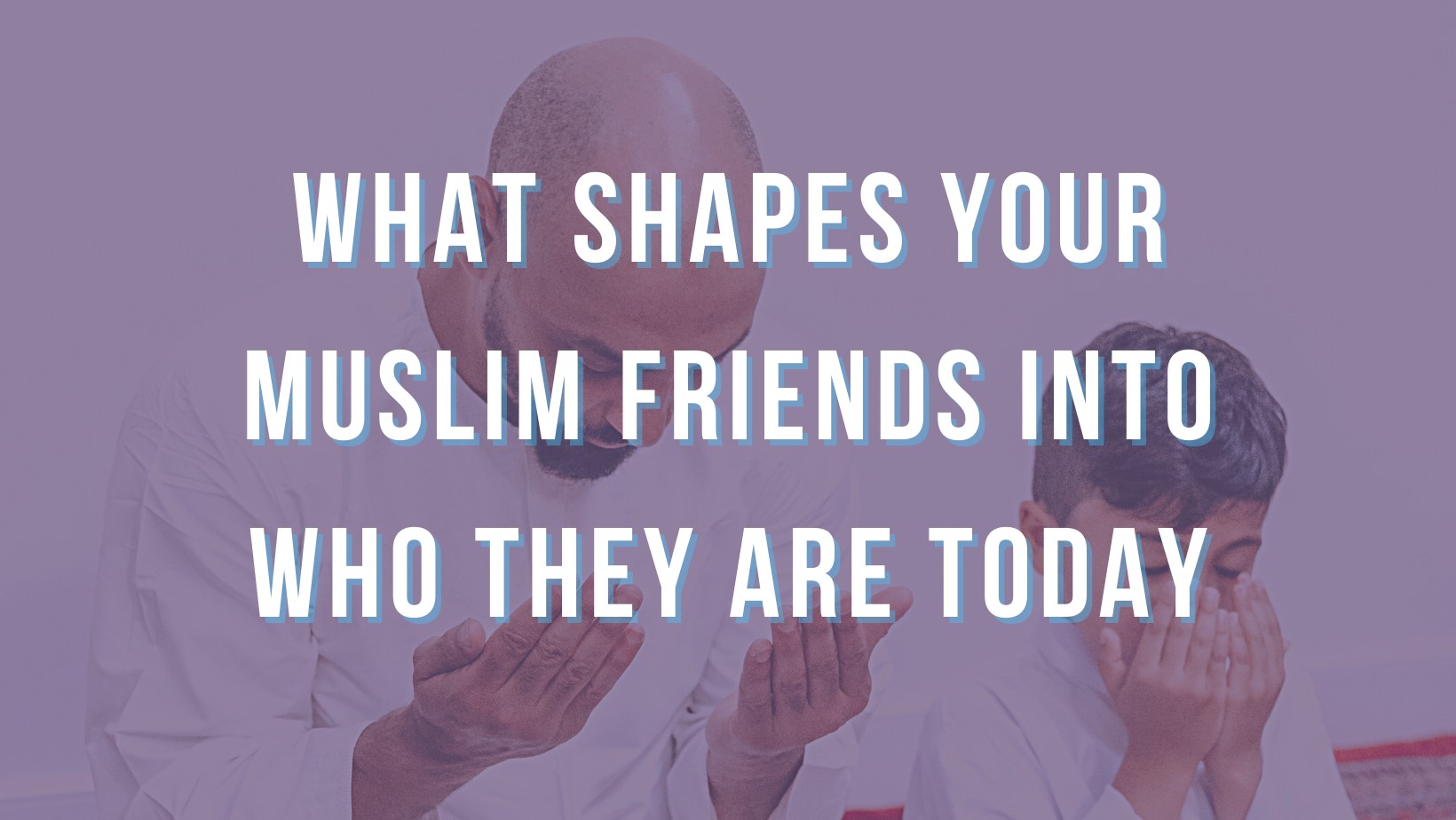 What Shapes your Muslim friends into who they are today

When you are talking to a friend, and you have gained enough trust in the friendship, you both begin to open up about things. Usually you hear more about each other’s pasts, especially things that helped shape you into who you are today. Your childhood shapes you into who you are as an adult, so it is important to understand the basics of how your Muslim friends were raised. Knowing this will help you better understand them and love them.

In each section, we are going to explain a part of the Islamic culture that has to do with family and child-rearing, and then we will explore how this impacts your friend directly.

According to Islam, everyone in the world is born a Muslim, and people only believe in new religions because their parents raise them under a different religion. Therefore, Muslim parents believe that they are in charge of keeping their children on "the right path" – their kids inherit Islam from them and they should make sure they stay Muslim. Muslim fathers whisper the Creed of Islam (confession of faith) in the child’s ear right after they’re born, so that Allah starts protecting the child from Satan.

This means that Islam has been a part of your friend’s identity since birth! If they are asking any questions about your faith and you think they are considering a relationship with Jesus, you need to understand that this is going against everything they have been told and taught since birth. It will take some time for them to unlearn these things, so stay patient and persistent while loving them sincerely.

Marriage and family are a cornerstone of Islamic culture. Muhammad ordered that his people should be married and have children to multiply and grow the Islamic population. This is why Islam has higher birth rates than any other religious groups; for example, birthrate in Sweden, which is a non-Islamic country is 1.7 per woman, while in Egypt, a predominantly Islamic country, its 3.2 per woman. On average, every Muslim woman has 2.9 children, while non-Muslim women have 2.2 children (Pew Research Center). Since Muslims are ordered to have kids, it is a huge issue if a couple cannot have children. Sometimes, the husband’s family will force him to marry an additional wife so that he can have children.

Traditionally, the mother is in charge of taking care of everything for the newborn. In modern day, some husbands help, but it is most often the mother who takes care of her infant child. In Islamic culture, extended family and community play a huge role in child-rearing, including having strong relationships with their cousins as playmates.

Do you have a Muslim friend in the workplace? One of the best ways to connect with them is to ask about their family. Whether you are friends with a Muslim man or woman, ask them about their kids, their parents and sibling because they value them highly, and it will show that you care about the same things.

In most Islamic homes, boys are valued more than girls. A family will continue to have kids until they have a boy. The boy receives the largest inheritance, including the family name. He will take care of his parents when he grows up and become the guardian for his mother and his sisters if they are unmarried, widowed, or divorced.
Boys are also treated with more pampering and love than the girls. At the age of six or seven, girls are given the duty of serving their brothers; they bring them their shoes, pick up their dirty clothes, and prepare snacks and sandwiches for them – essentially, the sister becomes a servant to her brothers. The boys are given more freedom, especially when it comes to playing outside of the house with neighbors. Any playmates (girls) for the daughters are usually required to come to the house to prevent their daughter from bringing any shame or poor reputation on the family.
This means if you are friends with a Muslim girl or woman, you need to understand that she is under more pressure and scrutiny than her brothers. You can give her a low-pressure space and let her know it is safe for her to be herself! Love her for who she is as a way to show Christ’s love to her.

There are high hopes and expectations for the children’s careers. The parents aim to boast about their children and their level of education, usually hoping for them to become doctors or engineers. For the most part, they do not support careers in the arts or less profitable fields. Of course, this is stressful on the children having to live up to their parents’ expectations.
Muslim parents are always quick to boast about their successful children, but for the children who have any health issues or disabilities, they are hidden away from the public eye – especially the girls. The parents will try to cover up any weakness in their daughters so that it doesn’t hurt their chances of finding a good husband.
You can show love to your Muslim friend by loving them for who they are and what they are passionate about! This will mean a lot to them, especially if they are not in a traditionally lucrative career. If they have any disability or health  condition, it is important that you support them and confirm that you accept them as they are.

The family begins teaching a child the Quran when they are four years old. Usually by ten, the child will have the entire Quran memorized in Arabic, even if they do not speak Arabic! They are also required to pray in Arabic, and have their prayers translated for them.
Young girls look at the women in their family as an example, and they will copy their mother and aunts by putting a head covering on themselves. In conservative families, girls begin wearing a headcovering by age nine.
If you want to know more about the veil in Islam, check out our blog post, “More than a hijab: Letting go of stereotypes and loving like Jesus.”

Both Islam and Christianity believe that children are a blessing and a gift. Christian families also begin teaching their child scripture verses to memorize at a young age, however, they make sure that the child understands the verses and how to apply them. The Bible teaches parents:

“Train up a child [a]in the way he should go,
Even when he grows older he will not abandon it.”
Proverbs 22:6 NASB

However, the Bible teaches love. Love and acceptance for any child, male or female, sick or healthy, wealthy or poor. Any partiality for one child over another is unbiblical and not Christ-like.

How to start a conversation about kids

You may need to change these questions depending on your situation and your Muslim friend’s situation. If you both have kids, try to bond over similar experiences. If neither of you have kids, ask about their hopes for their family or what they might be looking forward to (or not looking forward to) when they do have kids.
Children’s rights Rights of children in Islam Islamic Families Christian families childhood

Subscribe to receive 1-2 emails a week with our newest blogs!
Next Contradiction in the Quran: Allah changing his word