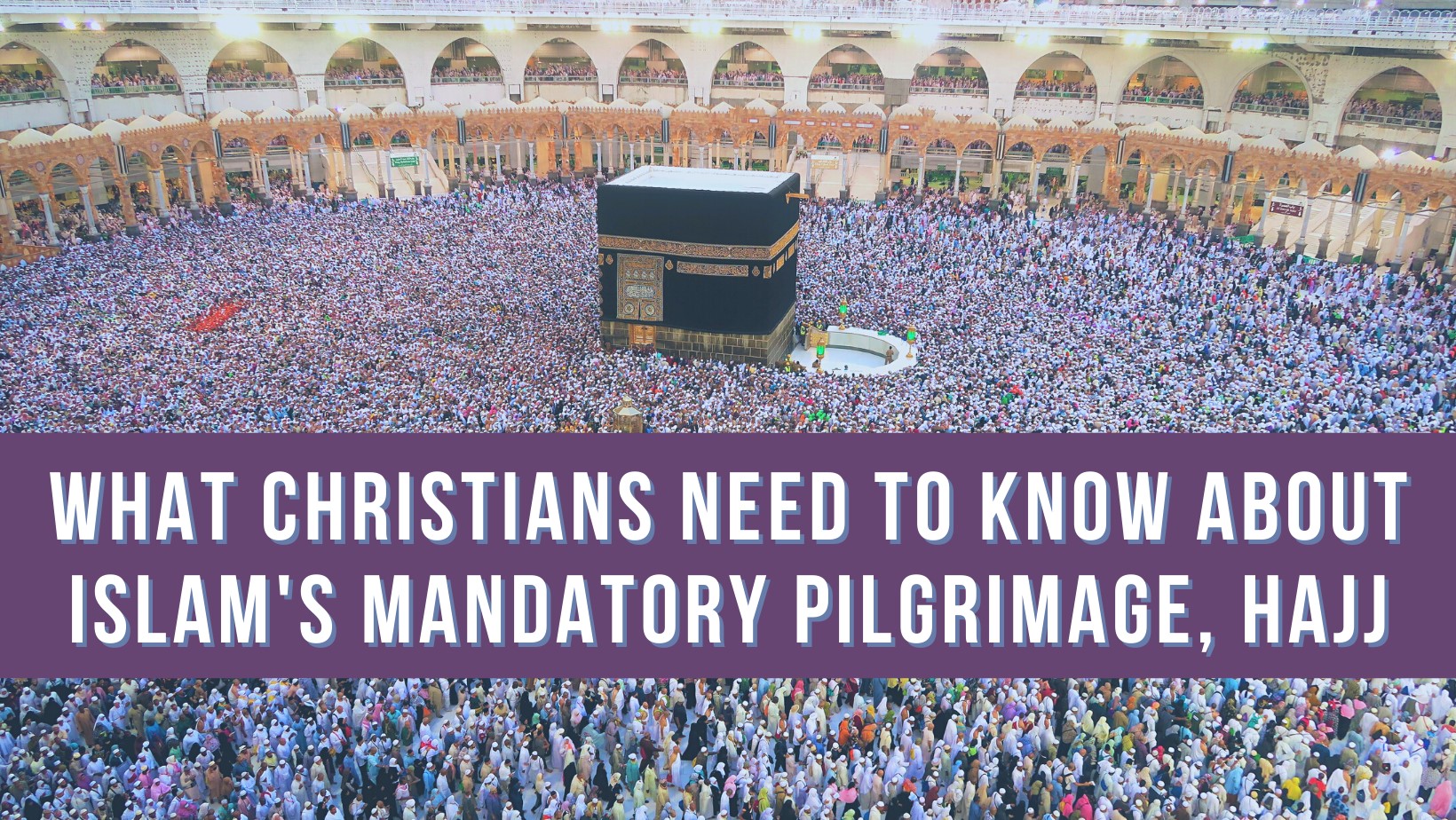 What Christians need to know about Islam's mandatory pilgrimage, Hajj

As one of the Five Pillars of Islam, the Hajj is mandatory for Muslims (with some exclusions for medical conditions). In 2022, the Hajj is July seventh through the twelfth, and millions of Muslims will be traveling to Saudi Arabia. Hajj is always during the twelfth month of the Islamic lunar calendar, which is called Dhu-Al-Hijjah.

There are almost 1.9 billion Muslims in the world today. Imagine if only 1% wanted to do pilgrimage every year! That's why Saudi Arabia created a system where only a percentage of each Islamic country is allowed to visit every year so that no more than 2.5 million pilgrims enter the Kingdom. A referral and formal application through a local mosque is required, followed by a stamp of approval from the top Islamic government entity of the pilgrim's country.

The Hajj month is one where spiritual awareness is elevated in the Muslim's life. God uses this time to draw Muslims to Him – in fact there are many stories of this happening! After we outline the Hajj and what it involves, we share the story of Usama, a former Muslim who had a unique encounter during his pilgrimage. 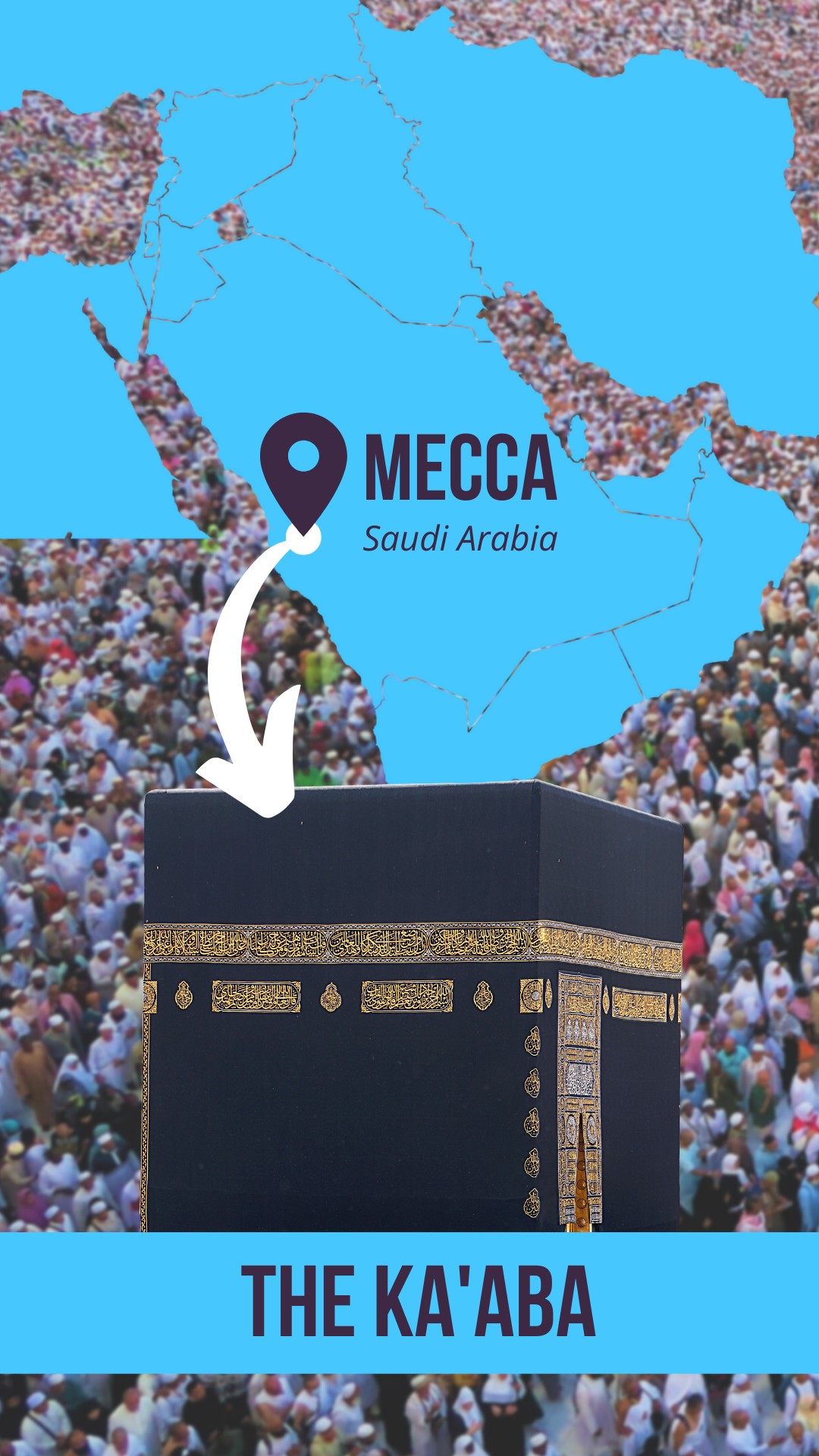 Let's start with the Basics.

Hajj is a pilgrimage to Mecca. What is Mecca? Mecca is where the Ka'aba shrine stands in Saudi Arabia. It is a large black cube, and is considered the center of the world by Islam.

Muslims claim Abraham built the Ka'aba, because it is the location where an angel of Allah showed Hagar (the mother of Ishmael) a spring of water to provide for her and her son. They also claim that Muhammad's ancestry goes back to Ishmael and they believe that Abraham visited that area with his son and built this shrine.

Importance of the Hajj pilgrimage

As one of the Five Pillars of Islam, the pilgrimage to Mecca is required of all Muslims who can physically handle the trip and have the economic means to make it. Muslims save all their life to afford making this costly trip. And well-off Muslims make the trip several times in their lifetime to receive purification not only for themselves, but for close family members who died without performing the Hajj. Once a Muslim completes the Hajj, they are given a special title: "Al-Hajj" for men and "Al-Hajja" for women. This title holds a lot of respect in Islamic communities. 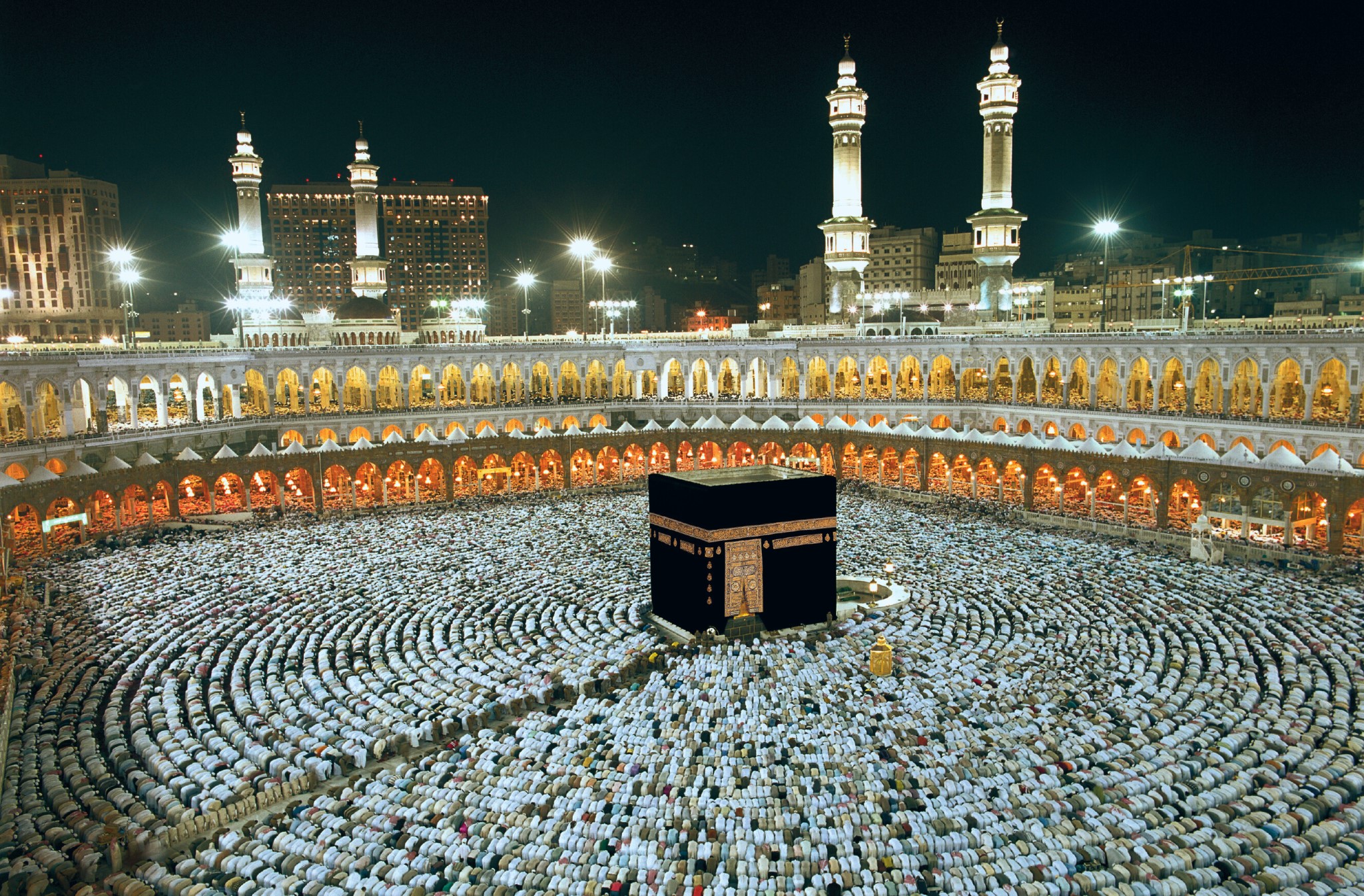 The six days of rituals are symbolic of events in Islam's history but some practices were derived from idol worshiping tribes during the time of Muhammad. Let’s break down the six days:

Salat (prayer) and preparation: Five miles away from the center of Mecca, Muslim men and women bathe (in separate places) and perform salat (prayer). Then the men put on two seamless white cloths, so that everyone partaking in the Hajj is dressed the same, removing evidence of any social or economic differences. Women must remain modestly dressed and covered while they perform the Hajj. The Muslim must state their intent to begin Hajj: "O Allah, I purpose to make the Hajj; make this service easy to me, and accept it from me."

Circling the Ka'aba (Tawaf): Next, the pilgrims circle the Ka'aba (the black cube) seven times. They are supposed to run around the first three times and walk the remaining four, however, considering that millions of Muslims will be trying to do this at the same time, it is hard to run or even walk. In fact, every year there are several incidents of stampedes injuring some of the pilgrims. The pilgrim performs another salat (prayer), before moving on to the next step.

Running between hills (Sa’ay): After circling the Ka'aba, the pilgrims walk between two hills (Safa and Marwa), to symbolize when Hagar ran between the two hills, searching for water for her child Ishmael.

Prayer at  mosque: The pilgrims travel to Mina, a sprawling tent city about 5 miles away, where they spend the day in prayer and spend the night.

Meditation at Arafat: The pilgrims must meditate on a hill near Arafat, a little over 12 miles away from Mina, in order to fully complete the Hajj. Muslims believe Arafat is the plain where Adam and Eve went after they fell from paradise and where Muhammad gave his last sermon. That night, they gather pebbles for what comes next.

Ramy Al Jamaret: They return to Mina where they throw stones at rock pillars, where Muslims believe Abraham stoned the devil who was trying to prevent him from following Allah's command. This is called “Ramy Al Jamaret.”

Eid Al Adha: They celebrate the feast of Eid Al Adha which is a remembrance of when Abraham almost sacrificed his son to Allah. Muslims believe he was going to sacrifice Ishmael, but Genesis 22 tells the story of Abraham obeying God's command to sacrifice his son Isaac as a testing of his faith. Eid Al Adha officially begins after the pilgrims offer a sacrifice. If they have the means, they sacrifice an animal near the place where they believe God provided a replacement for Ishmael – or they pay for someone to sacrifice the animal in their name.

Repeat Ramy Al Jamaret: The pilgrims perform another symbolic stoning and then spend the night again in Mina.

Farewell Tawaf: The pilgrims complete another Ramy Al Jamaret, then return to the Ka-aba to walk around it seven times again in the farewell Tawaf. They then have completed the Hajj and can return to normal clothing, but if anyone is unable to leave on this day, they must repeat the process the following day for the Hajj to be officially ended.

After the six days, some Muslims go to Medina to visit the site where Muhammad is buried with his close companions. Doing this gains the Muslim more favor from Allah. 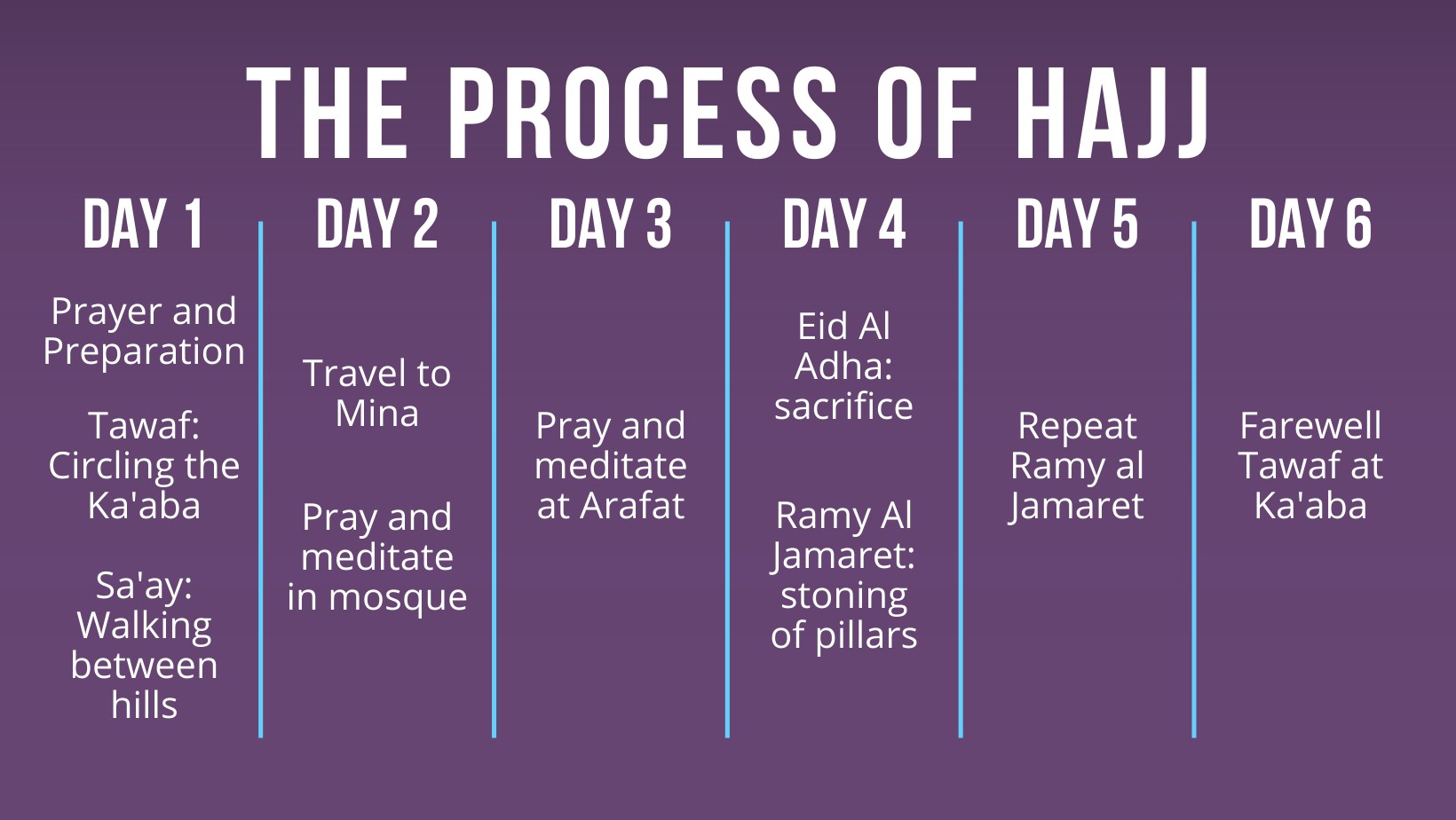 Usama’s Story of meeting God during the Hajj

Usama was born into an Islamic family that followed all of the rules and teachings of Islam, but he was missing a spiritual life. He could not feel the spirit of God with him, and as a last-ditch effort to feel Allah in his life before committing to atheism, he went on the Hajj. He was praying fervently his entire pilgrimage, hoping to feel something from God. But nothing happened. On the last day, after he fell asleep, he saw Jesus in his dream! He woke up, feeling far from Allah, but being assured that there was a true God.
As Usama was preparing to return from the Hajj, he was reading about Jesus on his phone and an advertisement popped up on his screen with a number to call to talk to someone about Jesus. He stared at the number for hours, debating within himself until midnight. Usama finally called the number, speaking with a Christian woman who talked to him about Christ.
Usama joyfully accepted Christ as his Lord and Savior on the phone with this new friend, and has since then reached out to us for discipleship and to learn more about God’s Word. We are currently teaching him how to read the Bible and answering his questions.
This year, let’s pray that God will reveal Himself to Muslims on the Hajj, just like He did with Usama.

How to talk to your Muslim friend about the Hajj

Because of how Islam's history has Abrahamic roots, the Hajj and feast of Eid Al Adha are great opportunities to talk about your beliefs with your Muslim friend. But, like always, ask them questions first, and then see if they have questions about your faith to continue the conversation.

Ask them these questions to start the conversation:

We need to pray for those who partake in the Hajj for many reasons. There are physical dangers on the trip, such as getting injured in a stampede or losing their valuables. God can use anything to draw the lost into His love, so we need to intercede on their behalf and pray for intervention. God has used the Hajj to present Himself to Muslims through visions and spiritual experiences in the past…He can do it again!

A prayer over Muslims making their Hajj

Jesus, I pray for protection over those who are traveling to Mecca right now. Keep them safe from injury or harm. Please use this experience as a way to reveal yourself to them. As they walk around the Ka'aba, call to them and restore them to your love. Help me speak the right questions and answers to my Muslim friend that will point back to you. Amen.
: What is Hajj when is Hajj what is Hajj in Islam Hajj information 7 steps of Hajj 6 days of hajj hajj outline

Subscribe to receive 1-2 emails a week with our newest blogs!
Next Pray with Us: Eritrea