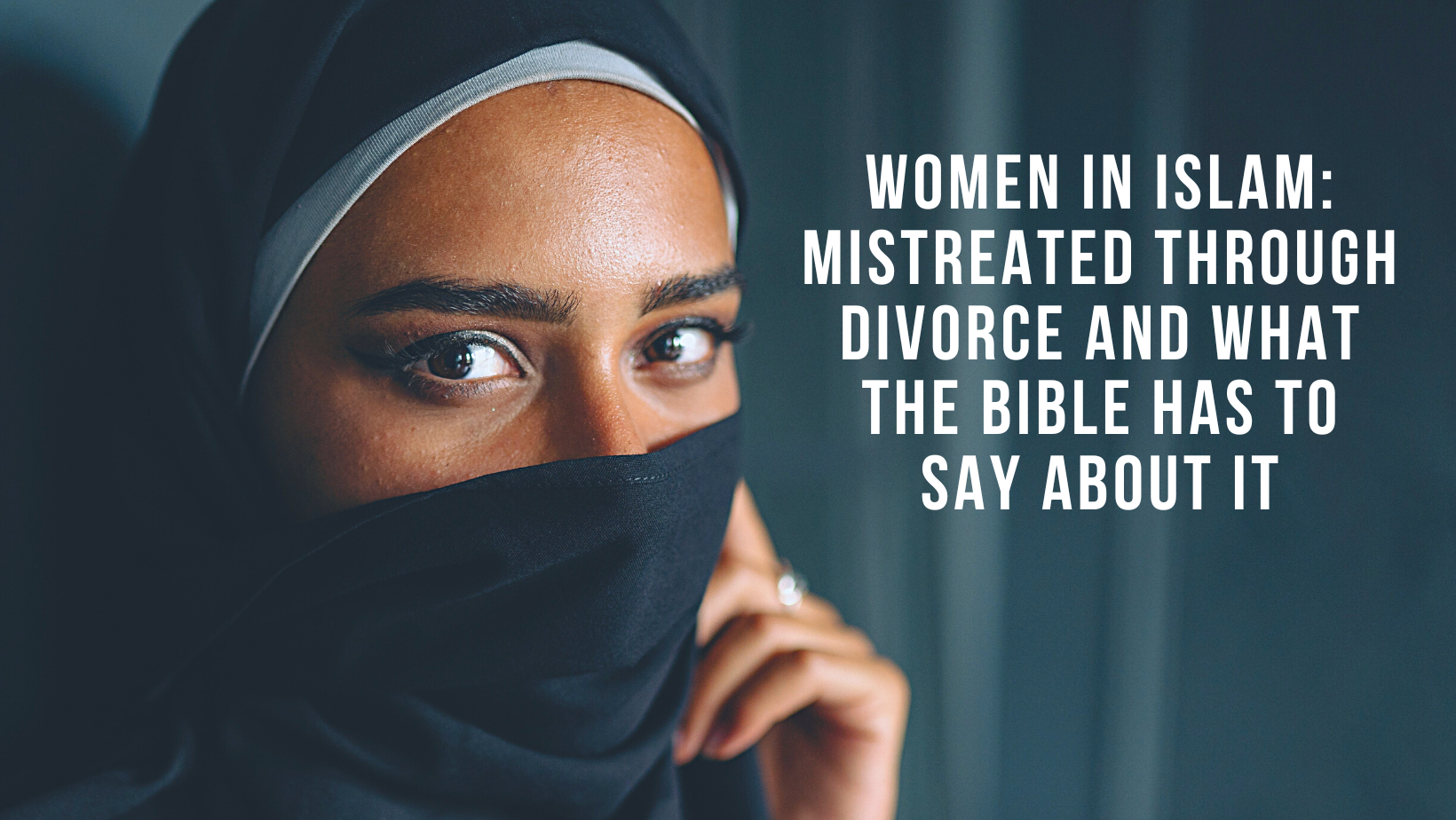 Women in Islam: Mistreated through divorce and what the Bible has to say about it

Islam does not teach that divorce is a sin. In Shari’a law, marriage is a legal contract and not a covenant between a man and a woman, therefore divorce is considered the breaking of a contractual agreement and nothing more.

The power of the husband in Islamic divorce

Within most of Islam, husbands have all the power to issue a divorce. The man may divorce his wife for whatever reason he wishes, by simply saying out loud for her to hear, “You are dismissed/divorced,” three times. Muslim women have been divorced because of a poorly cooked meal, not obeying her husband’s unreasonable orders, being sick often, or even because her child failed in a school year! After the verbal divorce, there is a three month waiting period where all marital relations stop to ensure that the wife is not pregnant and that no reconciliation can be reached; after these three months, the divorce is final.

The fact that all it takes for a man to divorce his wife in Islam is simply saying one phrase three times gives a lot of power to the man.

Muslims claim that Islam honors women, because it tries to prevent the man from divorcing the same wife countless times. In order to do this, Sharia Law has stipulations about what must happen before a husband who has divorced his wife for the third time can remarry her.

In order for a woman’s original husband to remarry her, he must arrange for her to be married to another man and that marriage must be consummated. The new husband must then divorce the woman, then the original husband is permitted to remarry his ex-wife. This is supposed to be an attempt to keep men from abusing the power of divorce. But sadly, the wife’s dignity, feelings, or honor are not considered in this. There are specialized men known in the Islamic communities who make money by helping husbands divorce and remarry their wives multiple times. They agree with the husband to marry their divorced wife for a few days and then divorce her, creating a toxic cycle for the woman where she never feels safe in her relationship.

The fact is, regardless of this stipulation, Muslim women are still treated unfairly when it comes to divorce. Surah 2:229-233 has many statements to help the wife but they are often disregarded:

Divorce for a Muslim woman could be disastrous. Depending on the culture and community she lives in, it could ruin her reputation and prevent another man from wanting to marry her. If a woman’s ex-husband spreads rumors about her being inadequate, this will make other men in her community less interested in marrying her. In Islam, a woman must have a male guardian (called a wali).  She must be under the guardianship of her father, brother, son, or husband at all times. So if she does not remarry, she is under the guardianship of another male family member.

Socially, divorce can mean a lot of different things for Muslim women. There is the risk of being socially excluded and stigmatized, because there is the assumption that something was wrong with her if her husband divorced her. For Muslim men, divorce does not often hurt them socially.

The divorced woman does not have the power to keep her own children in her custody. If a woman’s children are under 7 years old at the time of the divorce, they remain with her till age 11 or 12. If they go with their mother but she marries another man, then the custody automatically returns to the father. Sadly, there is no negotiation of custody depending on who is the better parent, so if a woman is divorced and the husband wants the children, she cannot fight to have her children. However, there are some cases where the father will abdicate his custody of the children to the mother.

In the last few decades, Muslim women have gained some ground in the courts, and they can now ask to be divorced from their husbands if they can prove that the husband is cheating on them or if they are being beaten up. But in such cases, the woman loses all her financial rights, alimony, and she may even lose her children. This means, only wives who have their own wealth or whose parents are willing to take care of her will have the courage and the means to sue her husband and ask for divorce. This type of divorce is called “Kulua” because the wife is initiating it.

More about divorce in Islam

There is not one universal way that Muslims handle divorce. Some Muslims in America follow Western standards of what divorce looks like, while others follow Islam’s traditions or laws. In some Islamic countries, such as those in North Africa, divorce is incredibly common.

Socially, divorce can mean a lot of different things for those involved. A divorced woman is pushed to remarry. She often becomes the second, third, or even fourth wife. Many times, she is married to a much older man where she will serve him and his children. Parents are ashamed of their divorced daughters, and they try to ‘cover’ this shame by marrying her again quickly. She is not allowed to stay single, live alone, or build a career. Sadly, Muslim men do not treat divorced women well. Often, a divorced Muslim woman is an easy target for Muslim men to abuse and take advantage of. For Muslim men, divorce does not often hurt them socially. On the contrary, they will have plenty of women to choose from and start a new family.

What does the Bible say about divorce?

The Bible is very clear when it tells us that God hates divorce (Malachi 2:16). Jesus clearly states in Matthew 5:32 that unless there was infidelity in the relationship, those who have marital relations after a divorce are committing adultery.

There are no rules about which gender can and cannot initiate a divorce within the Bible, and there are no rules about which parent must raise the children. According to biblical standards, it is best if both parents work together to raise the child even after a divorce. While healthy co-parenting can be hard, the Lord gives us the resources to do it.

How should I talk about divorce with my Muslim friend?

The context of the conversation will determine how you should approach the topic of divorce with your Muslim friend. If you are talking about it because they are going through a divorce or have previously been divorced, then you should talk about this topic with empathy. This does not mean that you pretend to believe that divorce is okay, but in order to show the love of Christ, you must be considerate of what they are currently going through or have gone through.

If your Muslim friend is asking for your opinion on divorce in order to compare it with their own, then be sure to share clearly what the Bible says about divorce and why. Share how marriage is a covenant between one man and one woman and it was never meant to be broken. Talk about God’s original design for marriage, that He is the one who created the institution of marriage, and use this opportunity to share how marriage can be a metaphor to Jesus’ relationship with the Church when done correctly.

“Marriage is to be held in honor among all…” Hebrews 13:4

Dear Lord, please give my heart wisdom and empathy. Let divorce break my heart the way it breaks yours, and give me the words to share your heart with my Muslim friend about divorce. Please protect my Muslim friend’s marriage as well as mine. May You be glorified above anything else. Amen.

Subscribe to receive 1-2 emails a week with our newest blogs!
Next Giving Tuesday 2022